Paddling with Ghosts in Patagonia. 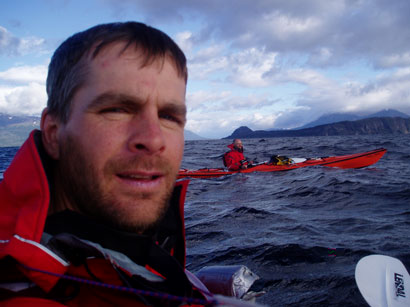 Sitting tense and nervous in the Chilean Naval Commander’s office in Punta Arenas in southern Patagonia, we hold our breaths as, with a flourish, the Commander finally agrees to add his all-important signature to the permission papers we need.  Smiling and dripping with gold braid, Commander Valenzuela rises from behind his imposing desk to wish us well for our journey ahead.  I want to grab him and give him a hug, but that would not be a very military thing to do, so we stand and utter profuse thank you’s in poorly spoken Spanish then stride triumphantly out into the biting wind, clutching the precious paperwork to our chests.

We have done it.  We have permission to paddle, without support, as much of the south western Patagonian coastline as we wish.  All the graft and perseverance of the past twelve months has finally come to fruition and the wonders of one of the most wild and windy parts of the planet lie open for us to explore.

Some days later, with boats and kit now readied, we paddle out from the shore of Puerto Natales to attempt our 400km sea kayaking journey through remotest southern Patagonia.  We are heading west and south into the wettest and windiest parts of the archipelago to undertake a circumnavigation of the towering Munoz Gamero peninsula.  Ahead lie a myriad of islands and channels and open crossings that will carry us eventually into the Magellan Straits, through the glaciers of Canal Gajardo and finally into the vast inland sea known as Seno Skyring.  This huge area is a true wilderness and we do not expect to see any sign of human activity for the next three weeks. 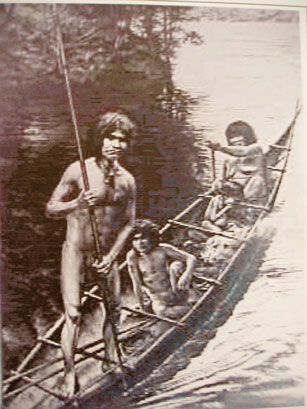 But this place was not always so empty of people.  Before the white man’s expansion into Patagonia, indigenous South American Indians lived amongst the mountains and islands for ten thousand years.   The Yamana and Alacaluf people were fisher-hunter-gatherers from the south and the west and, travelling in small family groups by beech bark canoe, they managed to eek out a life and a culture from this wind-ravaged land.  Now they are gone, decimated by diseases such as measles brought amongst them by European explorers, miners, farmers and missionaries and today only the stark landscape remains. 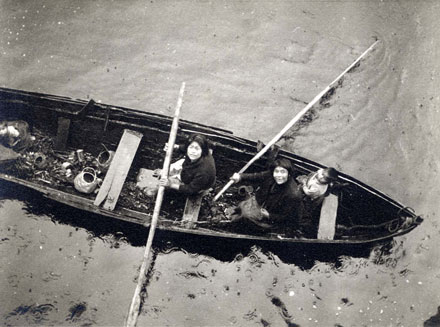 Indeed the main purpose of our journey is to revisit the remote lifeways and seaways of these ancient Fuegian indians.  We want to see what they had seen and perhaps to get just the smallest idea of how they may have felt in travelling through these channels and islands all those years ago.  Our journey is not an adventure race or an attempt to claim some “first”, it is simply a chance to paddle and to explore a vast wilderness at the uttermost part of the world, to settle to its natural rhythms, to observe its wildlife and to feed a sense of wonder.

We are to journey within lands and seaways which have spawned such legendary figures as Magellan, Fitzroy, Drake and Darwin and, as we push out from the shore at Puerto Natales, our minds are full of the stories and anthropologies of those who have passed this way before. 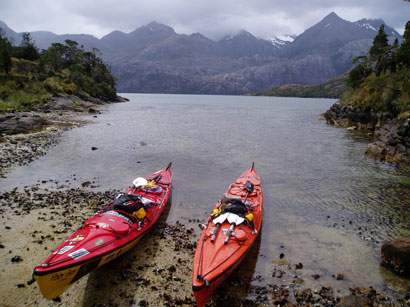 By the end of our first day we have paddled away from the Patagonian plains and into the looming presence of the Andes.  The mountains here, partially drowned by rising sea levels at the end of the last ice age, are topped with glaciers and ice caps and are thickly clad with dense nothofagus beech forest.  It is a place entirely devoid of all human life and we start to feel very alone.  With the wind rising to force five and the cloud level dropping fast, we are keen to find somewhere to land but the slopes rise precipitously from the sea and the forest grows right to the edge of the water, leaving no obvious places to put ashore.  The sea is grey and lumpy with regular white tops and, in pulling our heavy boats against it, the cold wind-blown spray piles up over our bows and dashes against our faces.  It has started to rain. 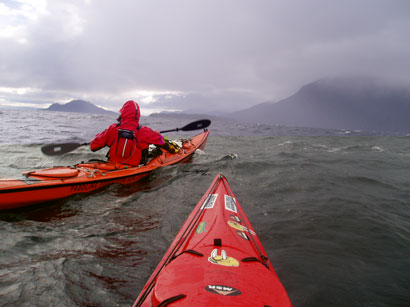 But fortune smiles…..and we do land and as the hours turn into days, we start to bed in to this extraordinary place.  Everything is dominated by the wind and all our decisions to paddle or to stay ashore are marginal.  My tiny anemometer reads force 5 gusting six on most days and, depending on the nature of the terrain, we are either hugging a lee shore or bouncing in lumpy white strewn seas battling to make another crossing.  It rains incessantly and we are thankful for the careful choice of equipment tried and tested back home on the west coast of Scotland. 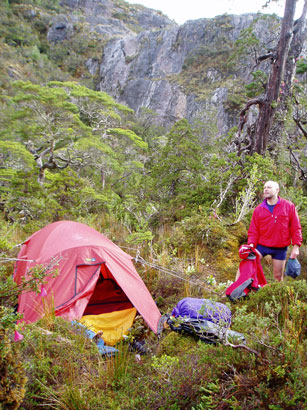 Indeed, one of the main challenges of this journey is to handle the consistently harsh weather.  It would be very easy to lose control out here.  One careless move amongst the harsh prickly vegetation would rip a paddling jacket or a tent and forgetting to tie up the boats at night would result in the high nocturnal tides stealing them away.  At the end of each day, we come ashore to set up camp, always in the wind and rain and we have another two hours of graft before we can crawl exhausted into our tent.  There is no level ground so we cut branches and shrubs and build up a bed of vegetation before pitching the tent on top of it.  So dense with living and dead trees is this ancient forest that, in battling through it one afternoon to climb a hill for a view of the sea ahead, it takes me one and a half hours to move 300m…….and my feet never touched the ground. 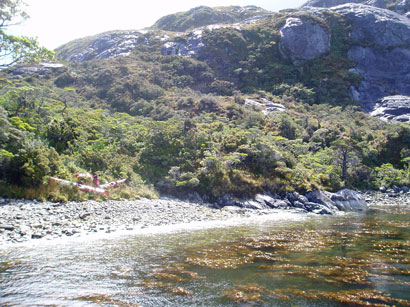 We begin to understand why noone has ever colonised this place.  Movement by sea is the only practical way to travel and our admiration grows for those ancient canoe peoples, who paddled flimsy beech bark canoes in this place.  We are paddling state of the art kevlar expedition kayaks and are feeding on the luxury of freeze-dried food while they travelled with stone age technology and spent every hour either hunting or gathering their daily meal. 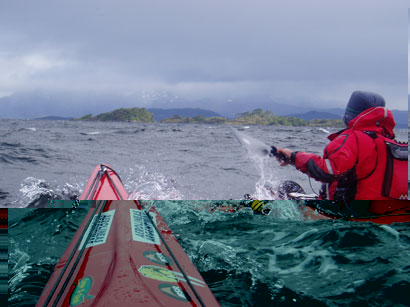 But what paddling this is.  Always marginal, always windy and white-strewn, this is a wonderful edgy place.  Far out in the middle of one crossing in the Magellan Strait, for a moment, the sun breaks through, grey sea turns to blue and distant mountains, snow covered, appear all around.  A rainbow brightens the sky and a lone albatross pendulums out over my bow, so close that I can see its black eye and the colour in its beak.  Fierce catabatic winds known as williwaws surge past, whipping the water into a white mash.  This is wind made visible and, like angry spirits, they flash and twist around and all we can do is hang on, leaning against the fury.  They pass and both of us are still upright.  Robert is grim faced and  I can feel my own panic rising, almost out of control.  The steep rocky coastline to our left flashes by.  Albatross wheel about us and huge fur seals porpoise through the waves between our heaving boats.  A great skua sweeps down and hangs in the turbulent air just a metre from my head, its feathers twitching in the violent winds.  It watches me lunging and leaping through this water, it utterly in control, me barely so, and comes so close that, were I not bouncing on the sea, I could reach out and touch it.  Momentarily I risk raising my paddle and it bobs away in the wind only to settle on the heavy sea right next to my boat.  These are moments to last a lifetime.

The wildlife here is prolific and, whether on sea or land, we are never truly alone.  Black-browed albatross carve up the skies in great wheeling curves, giant petrels, magallenic penguins, storm petrels, fur seals, sealions and porpoise are daily sights, hummingbirds and kingfishers welcome us to the shores and, soaring on vast wings, condors cast their broad shadows right over our boats. 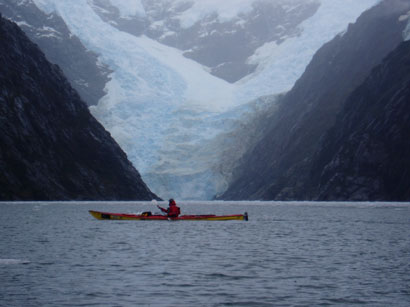 Around Day ten, we are 200 kms away from any human habitation and enter the relatively calm waters of Canal Gajardo.  No swell in here, just the ever present wind.  The seaway narrows to just a kilometre or so and the mountains, some of them shorn of their vegetation and black with wet rock rise almost sheer from the shore.  This is glacial country and vast ice fields, blue and white, reach down from mountain tops lost in cloud.  Above us the ice cracks and growls and seems like a living thing.  At the head of the ever narrowing channel, the sea is filled with water-carved chunks of ice that have spilled off the glacier and these have to be pushed gently aside in order to make progress.  It is a nervous time with the unwelcome prospect of overturning into an icy sea should the wind rise and throw the blocks against our boats. 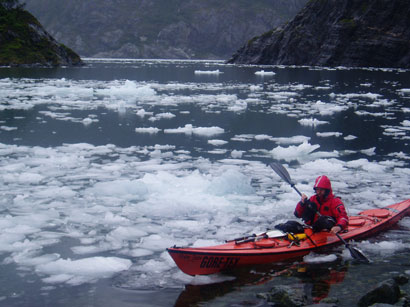 Waterfalls tumble out of the clouds, white with falling and thread a way through the glistening green.  There is water everywhere, under our boats, soaking the vegetation, pouring down the mountainside and from the air and encased in the ice of the blue white glaciers high above.  This trip is all about water, living on it, hiding out of it, inspired by it, battling against it, washing in it, drying out from it, avoiding it, embracing it.  Water is part of every moment of every day in this journey and we paddle on in the grey blue.

Eventually we break out of the narrow confines of the ice-choked channel into the vast inland sea that is Seno Skyring.  At twenty miles across, this sparkling place is encircled by distant mountains and, as we move east towards the end point of our journey, the land lowers, the sun is more persistent and we are paddling steep breaking waves within a ring of blue sky at last.   I catch glimpses of Robert, his boat disappearing for long seconds into the troughs and reappearing on the crests and every now and again I see him flung sideways by a breaking wave, or bracing as white water cascades over his boat.

Finally, some scattered estancia buildings appear clustered on the surf pounded shore.  This is our final stop and is the first sign of humans we have seen for twenty days.  The wind is now behind and the edge has gone off it.  Still steep but no longer breaking, the waves carry us surging forward towards the narrow channel of Canal Fitzroy and the finish.  Bringing our boats together, out of danger at last, we clasp hands and grin at each other, recognising the moment. Nothing is said and there is a curious mixture of elation and sadness at the ending.

Relying utterly on each other both for safety and for companionship, our friendship and mutual respect has deepened as a result and we are both deeply touched by this extraordinary place.  The ghosts of the ancient canoe peoples, the Alacaluf and Yamana, were ever present and, while we, encased in gortex and neoprene, travelled for just a few weeks, they, with much more limited technology, went naked and undisturbed for ten thousand years.  In so many ways is Patagonia a humbling place.

Postscript: as a result of the trip, Robert and I started up a charity called DAY1.  You can find us at www.day1.uk.com   We work with disaffected and disadvantaged young people and we are now in our fourth year of operation.  The idea to give something back was born in a tent in deepest Patagonia where we had time to think through the concept and develop an action plan to make it happen on our return.